Candace Avalos, a student adviser at Portland State University, on Thursday announced her candidacy for the Portland City Council.

Avalos’ announcement said that, if elected, she would push to create a system of district representation, making her the first among Council contenders — as well as the incumbents — to announce such a reform position.

Currently, the mayor and commissioners are elected city-wide rather than representing particular parts of town. That system has been criticized as creating an unrepresentative government. Officials are legislators and bureau executives, which has been cast as an oversight system rife with conflicts.

In an announcement video, Avalos said the city-wide elections system is “outdated” and “keeps holding us back as a city.”

“We deserve a City Council that answers to the people,” she said, “not just the bureaus they oversee.”

Similar to other candidates, Avalos said she would also endorse policies that address homelessness, government accountability and a fair economy, but she did not give specifics.

If elected, Avalos would also be among the youngest people elected to the Portland City Council. She is 30; former Commissioner Erik Sten was 29 when elected in 1996.

At Portland State, Avalos advises the student government and Greek organizations, according to a university bio. She was formerly a high school Spanish and English teacher.

Avalos is a member of the Citizen Review Committee, a city panel of volunteers who promote police accountability. Her time on the committee “has been an invaluable experience in best practices around government transparency and the need to rebuild the public trust,” Avalos’ announcement said.

In a statement, she said unity among Portlanders would help officials to tackle the city’s tough problems.

“When looking out at Portland, many see division and tension, but I am hopeful. I see diversity of thought, diversity of lived experiences as our strength and our path forward,” she said. “Our growth has brought challenges, but only by having everyone at the table can we come together as neighbors and tackle these issues.”

Avalos is running for the seat currently held by Commissioner Amanda Fritz, who is retiring. Carmen Rubio, the leader of a Latino-focused nonprofit and a former City Hall staffer, has also declared for Fritz’s seat. 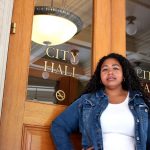