Candace Avalos (candaceforportland.com) is a student advisor specializing in civic engagement at Portland State University, and serves as acting chair of the Citizen Review Committee. Avalos qualified for funding from the city’s Open and Accountable Elections program.

Why did you feel called to run?

I am a first-generation “Blacktina.” My Black family comes from southern Virginia, Jim Crow South. My mom was brought here by my grandparents in the 1970s from Guatemala. I have these two really distinct American life stories.

At PSU, I teach classes on civic engagement and leadership. I’m prepping (students) for how to be those ethical, communicative, transparent leaders we all want to see.

I’m also the current acting chair of the Citizen Review Committee, the city’s police accountability board. (In working with city government), the form of government kept coming up as a barrier. The way our (city) government is currently structured, not only do we not have district representation, but also the way commissioners interact with each other and make decisions on bureaus, was just totally siloed. That pronounced for me just how dysfunctional in so many ways this form of government is.

What is unique about your background and lived experience that you can bring to the council?

For me, another important part of my run is I feel I represent a generation that is being left behind by the economy. We are unnecessarily cost-burdened, whether it be student loan debt, other kinds of debt young people have been forced into, and we are unable to progress in our young adulthood.

In the aftermath of COVID-19, which has been a very glaring spotlight on all of these inequities, I think this is going to be a super pivotal moment to say, ok, whose voices aren’t at the table? I really think that my candidacy is bringing forth an energy around (the fact that) we can do things differently. And it’s clear in how we’re seeing our response to COVID-19, we actually could provide multiple sanitation and water stations for the houseless.

What do you believe the role of city-recognized neighborhood associations should be?

I think that while the intent was good, it was a bandaid approach to a larger problem, which is that people feel they aren’t represented in how decisions get made, especially land use and development. I can understand and respect the unique role neighborhood associations have played in Portland, but I think we really need to shift some of that power back to organizations that have been left out.

How people engage with neighborhoods is a lot different when you’re able to plant your roots somewhere. This outside voice that dominates those conversations is from people that have had their houses for decades, which is really not the reality for most of us. But we can negotiate how neighborhood associations can still play an important role.

What do you feel is missing on City Council?

Obviously, the younger generation’s voice is severely missing on City Council. I also think how we engage with the people, and how we reflect the 21st century, and how people engage with each other is really missing.

I helped facilitate three community conversations with Jo Ann Hardesty, and there was such a palpable thirst the people had to just be heard. That’s unacceptable that one commissioner is going out of her way to have those conversations, why is there not a united effort from everybody to do that?

What would you do to increase racial and socioeconomic equity in Portland?

Right now we’re experiencing on all levels of government, lots of people that are retiring, and we’re having trouble recruiting young people to be excited about those jobs and to want to go into that sort of career.

There are really intentional things we can do to recruit people to get invested younger into the work of the city, and to give them insight into how these jobs have purpose…I would love to start an internship program for the city. I’ve already done that infrastructure at Portland State. There’s so many ways we can be leveraging these local institutions like PSU and PCC and have young people invest their ideas back into the city. And I think that that’s what’s going to create the buy-ins that’s going to bring in these voices that we need. 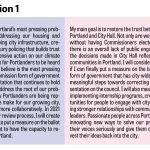 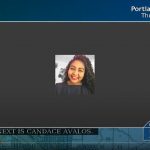